Laser eye surgery, or vision correction, reshapes the cornea to change the focusing of the eye and improve vision without glasses or contact lenses. Short/near-sightedness (myopia), Long/far-sightedness (hyperopia) and astigmatism can all be treated with this simple corrective procedure. There are two types of laser vision correction:
Results for both types of surgery are the same, but the most appropriate procedure will depend on the examination results and the individual needs of the patient. Mr Gore will determine the best treatment for you during your consultation.

LASIK is the commonest type of laser vision correction worldwide. It is performed using a suction ring applied to the eye to secure it for the creation of a thin corneal flap on the top of the cornea with a femtosecond laser. An excimer laser is then applied under the flap to re-shape the cornea to correct your vision. The flap is gently re-positioned at the end of procedure.

Find out more by hovering around the image, or by clicking the dots below the text below the image. 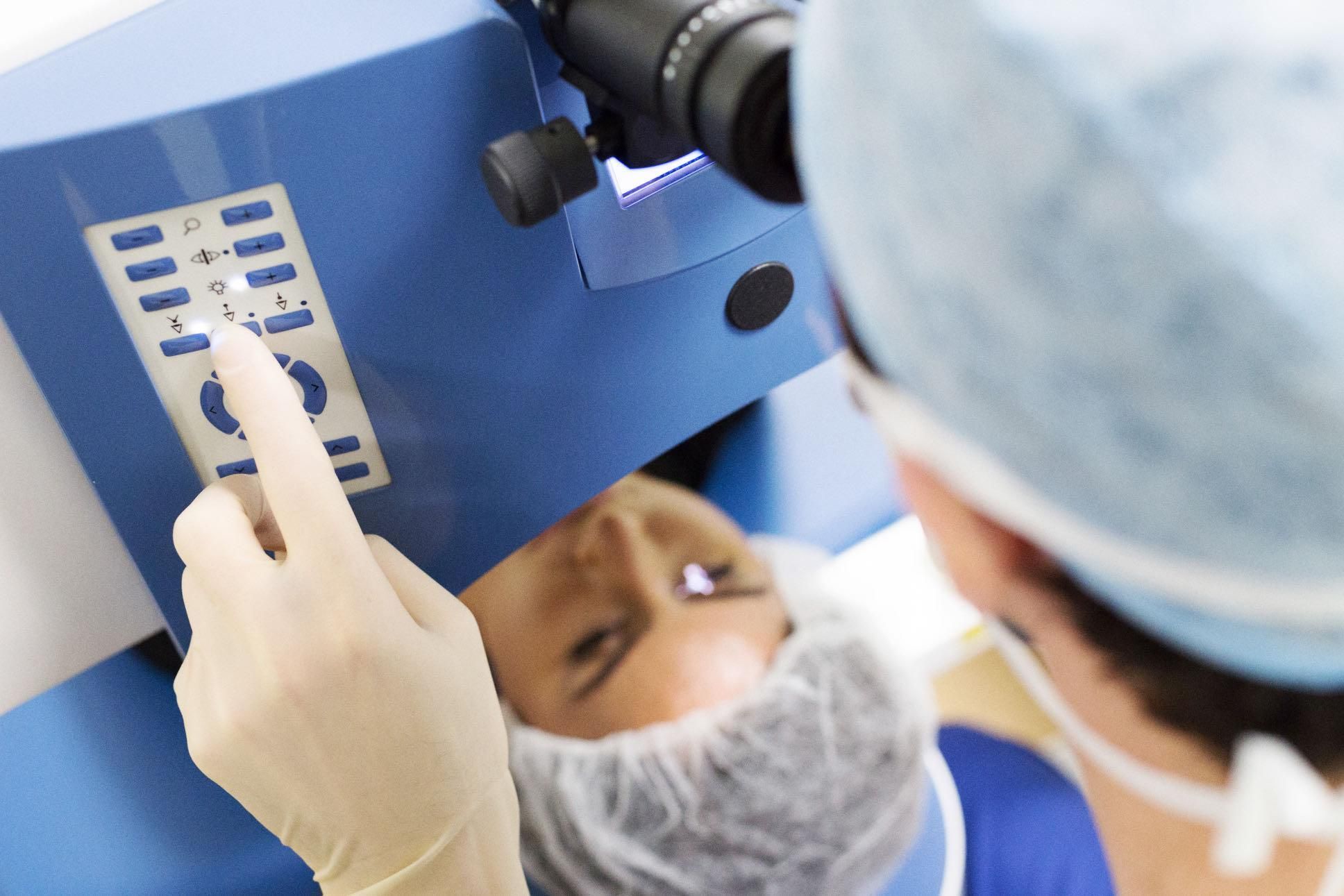 LASIK is suitable for most patients, but there are a number of reasons why an alternative such as LASEK or ICL surgery may be a safer option for you. For example, if your corneas are thin, or your prescription is very high. LASIK is also not suitable for younger patients, or those at high-risk of flap dislocation (e.g. contact sports players).

How long does the procedure take?

LASIK is a quick procedure. Two different lasers are used during LASIK - one to create the flap (the femtosecond laser) and another to reshape the cornea underneath the flap (the excimer laser). Treating each eye takes about 10 minutes, with the laser part lasting only a few seconds at a time.

What are the risks?

Recovery after LASIK eye surgery is rapid. Your vision in most cases will already be better straight after the procedure is complete. The following day you should be seeing 20/20 or better. We advise you to take the day off following LASIK. By day 2, you should be fine to head back to work.

LASEK and TransPRK eye surgeries are both examples of laser treatments applied directly to the surface of the cornea (without a flap). LASEK involves manually brushing away the corneal skin layer (epithelium). A more advanced technique, transepithelial PRK (TransPRK), reshapes the cornea through the epithelium. TransPRK with the Schwind Amaris 1050RS laser using SmartSurfACE technology, is a 'no-touch' technique for laser refractive surgery - applying the laser light directly to the surface of the eye means no brushing, no cutting and no flap.

Find out more by hovering around the image, or by clicking the dots below the text below the image. 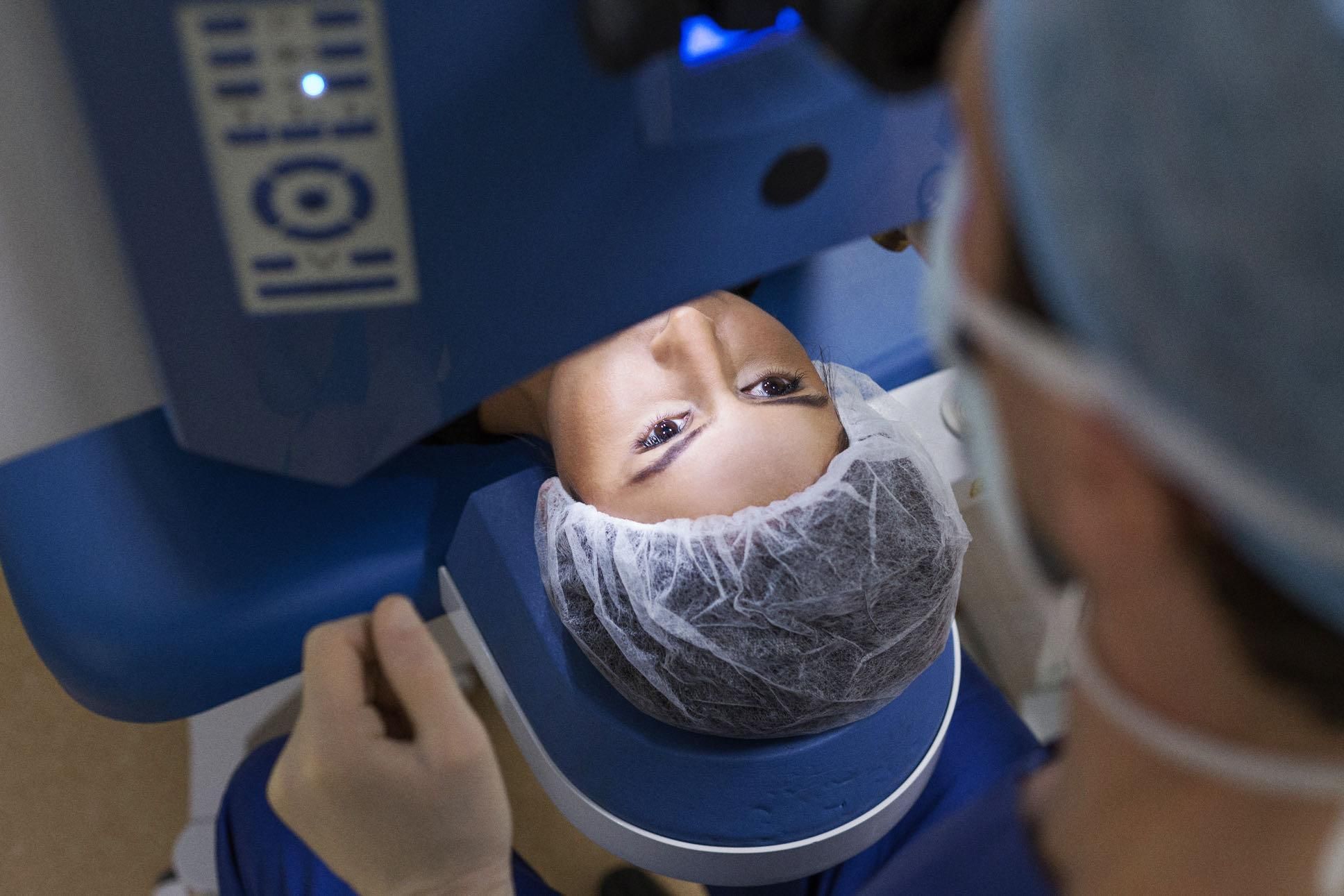 If your corneas are on the thin side, a surface laser treatment may be preferable to avoid treating too deep in the cornea. Also, if you play contact sports, martial arts or are at risk of head injuries (police, military) it is best to avoid a LASIK flap that could be dislodged. Following LASEK or TransPRK your eye will just a secure from future injuries as before your treatment.

How long does the procedure take?

LASEK and TransPRK are phenomenally quick. The laser takes less than 60 seconds each eye. A bandage contact lens is applied at the end to help the healing process. You’ll be sat up again less than 10 minutes after you entered the room.

What are the risks?

Recovery after LASEK or TransPRK is slow. Your vision will be blurred for the first 3 to 4 days, before it begins to sharpen up. The first evening and night can be painful and light sensitive. You will be given some anaesthetic ‘numbing’ drops to help ease the discomfort. Expect to be off work for a week. Vision continues to improve through the second week and beyond.
Additional information is available from the Royal College of Ophthalmologists.
You can also get answers to some frequently asked questions about Laser Eye Surgery below.
FREQUENTLY ASKED QUESTIONS
How much does laser eye surgery cost?
Information on prices for all of our procedures can be found on our Prices pages. 0% finance options are also available.
What are the different types of laser eye surgery?
In LASIK eye surgery, a femtosecond laser – which emits ultra-fast pulses of light allowing for extreme precision– is used to ‘cut’ a thin flap of corneal tissue, underneath which an excimer laser – utilising ultraviolet light – is applied. The flap is then laid flat at the end of the procedure.

Recovery after LASIK eye surgery is rapid with minimal discomfort, and most patients achieve driving standard vision the following day.

TransPRK, PRK and LASEK eye surgeries are all examples of laser treatments applied directly to the surface of the cornea (without a flap). LASEK and PRK both involve manually brushing away the corneal skin layer (epithelium). A more advanced technique, transepithelial PRK (TransPRK), reshapes the cornea through the epithelium. TransPRK with the Schwind Amaris 1050RS laser using SmartSurfACE technology, is the only 'no-touch' technique for laser refractive surgery - applying the laser light directly to the surface of the eye means no brushing, no cutting and no flap.
How long does the surgery take?
Both LASIK and TransPRK are very quick procedures. Two different lasers are used during LASIK - one to create the flap (the femtosecond laser) and another to reshape the cornea underneath the flap (the excimer laser). Treating each eye takes about 10 minutes, with the laser part lasting only a few seconds at a time. TransPRK surgery only requires one laser, with the procedure lasting less than one minute per eye.
Does the procedure hurt?
No. Anaesthetic drops are used to numb the eyes so that no pain is felt during the procedure. During LASIK, you may feel some pressure while the flap is created. If you are really nervous at the thought of laser eye surgery, a sedative in the form of a tablet can be given to help you stay relaxed.
Is vision improvement from laser eye surgery permanent?
Natural changes in your prescription can occur at any age, irrespective of previous surgery. Laser surgery will not prevent normal age-related development of cataracts. Further treatment may, therefore, be required as you get older. If your vision is not sufficiently corrected after LASIK or TransPRK, enhancement surgery is provided free of charge within 2 years of your initial treatment.
How long does it take to recover after laser eye surgery?
Discomfort after LASIK treatment is minimal, and you should be able to return to work within a couple of days. You will likely have red patches on the whites of your eyes - these are minor bruises that occur while the LASIK flap is being created. These are completely normal. They will take a week or longer to completely disappear.

Recovery after TransPRK is slower and more uncomfortable. In the first 24-48 hours following TransPRK surgery the eyes can be painful and light sensitive while the eye's surface skin layer (the epithelium) heals. Light sensitivity is a near-universal symptom for a short time following treatment. Regular use of the lubricating drops provided will soothe the eyes. You will also be given some anaesthetic ‘numbing’ drops to help you get through the first day. You should expect to take a week off work following TransPRK.
How good will my vision be following laser eye surgery?
Compared to your pre-treatment unaided vision, your vision immediately after the surgery will likely already be better, although it will be hazy. Vision recovery after LASIK is quick, with most patients achieving driving standard vision the very next day. Following TransPRK, the vision can be very blurred for the first few days, with two-thirds of patients reaching driving standard vision by the end of the first week. Your vision will continue to improve during the following weeks. The final vision results for both LASIK and TransPRK are the same.

Dry eye, night glare and haloes (which are rings around light sources) can occur following laser vision correction. Symptoms typically improve over the first few weeks, but may persist for several months. Long-term dry eye is very rare.
I have dry eyes - can I have laser eye surgery?
Discomfort wearing contact lenses due to dry eyes is one of the most common reasons for seeking laser eye surgery. In most cases, laser surgery can still be performed - treatment to improve the ocular surface may be required prior to surgery to optimise the results.
Who should not have laser eye surgery?
There are a number of reasons why laser surgery may not be suitable: For example, if your corneas are too thin, or your prescription is too high, lens implants may be a safer alternative. LASIK is not suitable for younger patients, or those at high-risk of flap dislocation (e.g. contact sports players); in this situation, a surface laser treatment (LASEK/TransPRK) may be a safer alternative. Mr Gore will discuss options with you during your consultation.
What are the risks of laser eye surgery?
Overall, laser eye surgery is very safe. The risk of a serious complication (e.g. infection, scarring, ectasia) requiring a corneal transplant to restore vision is approximately 1 in 5,000. This compares with the risk of a serious corneal infection due to the wearing of contact lenses of approximately 1 in 3,000 per year.
When can I resume exercise & swimming?
During the first few days after laser eye surgery it is very important to protect the surface of the corneas as the eyes heal. You can return to light gym work (treadmill, exercise bike) by day 3 following your surgery. Swimming (either pool or sea), and other activities including racquet sports, can be resumed after 1 week. Swimming goggles are advised for the first month.

Call Us
Email us